AutoCAD for Mac is a CAD (Computer Aided Design or Computer Aided Drafting) software application for 2D and 3D design and drafting on the Mac OS X platform. And because it’s AutoCAD, you’re working natively in DWG™ format, so you can easily share files with clients, suppliers, and partners around the world, regardless of platform. 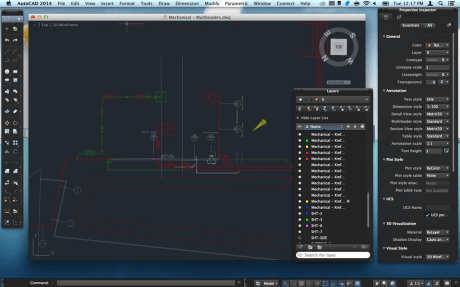 AutoCAD for Mac on Autodesk's site.

AutoCAD 2012 for Mac Service Pack 2 - This update resolves compatibility issues that have been reported while using the software on the latest versions of Mac OS X Snow Leopard (10.6.8) and Mac OS X Lion. It also resolves problems reported by the Customer Error Reporting (CER) utility and other general problems identified after AutoCAD 2012 Service Pack 1 was made available.

Design and shape the world around you with AutoCAD® for Mac® software. Explore your ideas, speed documentation, and share data seamlessly. With the power, flexibility, and accuracy you expect from AutoCAD® software in an intuitive, native Mac interface, AutoCAD for Mac helps you take your design and documentation further.

Native Support For Mac OS
Get the robust 3D free-form design tools and powerful drafting capabilities you expect from AutoCAD in an intuitive Mac® interface. AutoCAD for Mac software takes full advantage of the Mac OS® X platform. Draw and manage layouts using controls that work like you think. Pan and zoom with Multi-Touch gestures and find your designs quickly using Cover Flow navigation to flip through previews of your files

Native Support For DWG
Work natively in DWG™, one of the world’s most common file formats. Share files easily and confidently regardless of platform.

Network Licensing
AutoCAD for Mac offers a choice of licensing options – including network licensing – to help simplify software asset management and give you more flexibility in maximizing the software across geographically dispersed teams. JTB FlexReport can report on the usage.

Productivity Tools
Auto-complete options help you access commands more efficiently. The power of multi-functional grips extends to most AutoCAD objects, including lines, arcs, dimensions, and mleaders as well as 3D faces, edges and vertices. External reference (xref) visor puts xref tools at your fingertips. Elements modified in one file are easily updated in related design files. Divvy up large project components and work on them simultaneously to maximize efficiency.

Rendering Tools
AutoCAD for Mac software transforms your designs into images that convey the nuances of your design. Powerful rendering tools let you choose from hundreds of materials, apply photometric lighting, and control the display to create highly accurate, photorealistic images.

Associative Array Functionality
Reduce rework by creating relationships between arrayed objects, such as windows on a building or trusses on a bridge. The automation, management, and editing tools in AutoCAD for Mac software help you reduce repetitive tasks

Intuitive Interface
AutoCAD for Mac commands and tools will be familiar to AutoCAD users. And if you haven’t used AutoCAD software in years, the intuitive interface and context-sensitive help function in AutoCAD for Mac can help smooth out your learning curve.

Customization
Configure settings, extend the software, and build custom workflows. You can even create specialized design and drafting applications—such as industry-specific software or add-on applications from partner developers.

AutoCAD 2011 for Mac is only available in a stand-alone licensed version. There are no multi-seat stand-alone or network versions available.

What AutoCAD features are not available in AutoCAD for Mac

How to use trackpad multi-touch gestures in AutoCAD for Mac

You are using a Mac laptop trackpad or the Apple Magic Trackpad as a pointing device for AutoCAD 2011 for Mac and you want to know what multi-touch gestures are available.

The following multi-touch gestures are supported on a Mac laptop trackpad or the Apple Magic Trackpad:

An update is now available for AutoCAD for Mac at the following link:

General changes and improvements have been made to the following features:

Hatch
AutoCAD for Mac is no longer unstable when deleting certain hatch objects.

Memory Use
Some memory leaks have been fixed to improve memory consumption.

Start-up
On systems that do not meet the minimum system requirements, a message is displayed when AutoCAD for Mac is launched.

You are wondering what operating systems are supported for the AutoCAD 2011 for Mac release. Here they are:

What is AutoCAD 2011 for Mac software?
AutoCAD® 2011 for Mac® software is a version of AutoCAD software developed
specifically to run on Mac OS® X.

How is AutoCAD 2011 for Mac different from AutoCAD 2011?
A primary difference is in the user interface. AutoCAD 2011 for Mac has been
designed to follow common native Mac application user interface guidelines.
Instead of a ribbon, AutoCAD 2011 for Mac software has the familiar Apple menu
bar, and a number of workflow-based palettes. AutoCAD for Mac also supports
native Mac OS X behavior, such as Cover Flow navigation and Multi-Touch
gestures
You can create custom scripts, linetypes, hatch patterns, and command aliases,
as well as AutoLISP® and ObjectARX applications, in AutoCAD 2011 for Mac;
however, there is no support for DCL in AutoLISP, nor is there access to some of
the custom AutoCAD user interface controls in ObjectARX. Technologies specific
to Windows®, such as Visual Basic for Applications, OLE objects, and Windows
Media® Audio, are not supported in AutoCAD 2011 for Mac.
The most commonly used functionality of AutoCAD is included in AutoCAD for
Mac. However, there are a few commands that are not included in this first
release, including layer filters, layer groups, and layer states; Sheet Set
Manager; and DGN, PDF, and DWFTM underlay support.

Who should use AutoCAD for Mac?
AutoCAD 2011 for Mac software is suited for designers, architects, and
engineers who prefer to work in a native Mac environment, and who need to
create, edit, or review conceptual designs, 3D models, technical drawings, and
documentation.
The functionality in AutoCAD 2011 for Mac software makes this release best
suited for users in small to medium businesses who do not require features
supporting an enterprise wide workflow.

What are the purchasing options and pricing for AutoCAD 2011 for Mac
software?
AutoCAD 2011 for Mac software is available through authorized resellers or from
the Autodesk Store at www.autodesk.com/store. If you need help finding a
reseller, refer to www.autodesk.com/reseller. Consult your local reseller or the
Autodesk Store for pricing information and for information on Autodesk
Subscription.

Why is Autodesk requiring Autodesk customers to activate their
software?
Product activation is a simple way to reduce and deter unauthorized use and
casual copying of Autodesk products, with little to no impact on loyal customers.

How do I activate my software?
Through the activation and registration interface, you can activate your product
24 hours a day, seven days a week, on the Internet or via email. Either option
takes only a few steps to complete and requires your product serial number and
registration information.

Can I transfer my AutoCAD license between platforms (from AutoCAD
to AutoCAD for Mac, and vice versa)?
AutoCAD and AutoCAD for Mac are licensed separately. You can transfer your
AutoCAD 2011 license to a license for AutoCAD 2011 for Mac, or vice versa, by
contacting your local reseller and paying a platform exchange fee. You can also
upgrade from a previous version of AutoCAD to AutoCAD 2011 for Mac. To find
a local reseller, go to www.autodesk.com/reseller.

How can I get personalized support and training for AutoCAD 2011 for Mac software?
If you purchased this product from an Autodesk Authorized Reseller, contact your
reseller for support and training information. To locate an Autodesk Authorized
Reseller in your area, call your local Autodesk office or visit the Autodesk website
at www.autodesk.com/reseller.
You can also visit www.autodesk.com/autocad-support for a list of the support
options from Autodesk.

One of the features not included in the new AutoCAD 2011 for Mac release is the Layer States Manager dialog.

Although the Layer State Manager dialog is not available in AutoCAD for Mac, most of the really important layer state operations can still be performed using either the -LAYER command or the (layerstate-xxx) AutoLISP functions.

Using the stAte option of the -LAYER command, you can do the basics like saving, restoring and deleting layer states. Using the different (layerstate-xxx) AutoLISP functions, you can do quite a bit more. Here is a list of the available functions:

(layerstate-export) Exports a layer state to an .LAS file

(layerstate-import) Imports a layer state from a specified .LAS file

(layerstate-importfromdb) Imports a layer state from a specified drawing file

(layerstate-removelayers) Removes a list of layers from a layer state

(layerstate-restore) Restores a layer state in the current drawing

(layerstate-save) Saves a layer state in the current drawing

Customization of AutoCAD for Mac

If you want customization or programming done for AutoCAD for Mac please contact us with your inquiry.