This Catenary program for AutoCAD and BricsCAD makes it easy to create or draw a catenary curve as a polyline by specifying the start and end point and the length or sag and optionally a diameter(width).

A catenary cable is hanging from 2 base points. The other properties of the catenary are: Length, Sag, Incline Sag and Tension at sag. Specify one property and the catenary is determined.

You can also specify an immediate point for the catenary to go through.

You can draw multiple catenaries with length or sag or incline sag increasing. You can also draw multispan catenary by picking more than 2 points. If your picked points have Z coordinates, it is assumed that catenary will be hanging down in 3D space, and the catenary will be drawn in 3D. 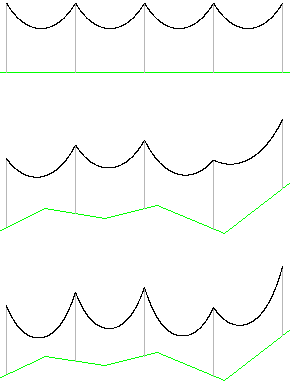 The current version is creating a catenary line using the catenary formula y = cosh(x) = (e^x + e^-x)/2 and numeric analysis that results in a good enough curve for many purposes.

How it works in 2D

How it works in 3D

How to create catenaries go through immediate points 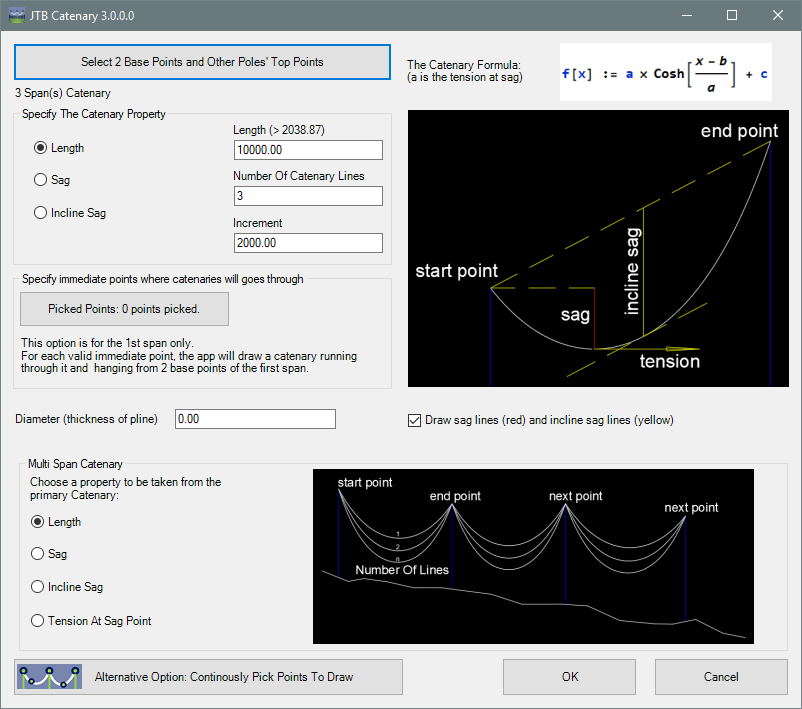 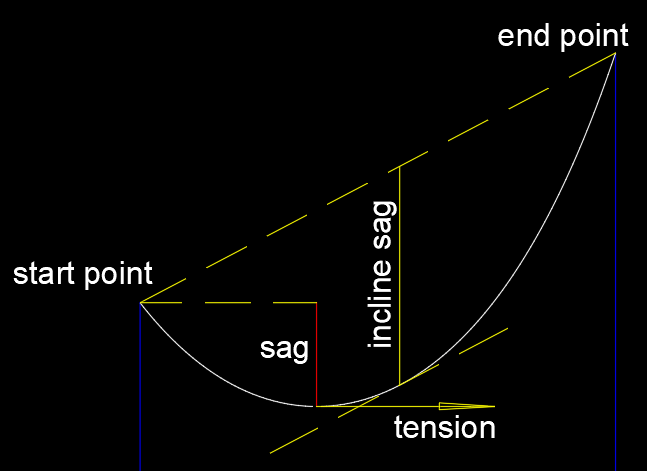 A parabola is different from a catenary. The catenary is the solution to a differential equation that describes a shape that directs the force of its own weight along its own curve, so that, if hanging, it is pulled into that shape, and, if standing upright, it can support itself. The parabola does not have the same property.

Catenary described according to Wikipedia:

In physics and geometry, the catenary is the curve that an idealized hanging chain or cable assumes under its own weight when supported only at its ends. The curve has a U-like shape, superficially similar in appearance to a parabola (though mathematically quite different). It also appears in the design of certain types of arches and as a cross section of the catenoid -- the shape assumed by a soap film bounded by two parallel circular rings.
The catenary is also called the "alysoid", "chainette", or, particularly in the material sciences, "funicular".
Mathematically, the catenary curve is the graph of the hyperbolic cosine function. The surface of revolution of the catenary curve, the catenoid, is a minimal surface, and is the only minimal surface of revolution other than the plane. The mathematical properties of the catenary curve were first studied by Robert Hooke in the 1670s, and its equation was derived by Leibniz, Huygens and Johann Bernoulli in 1691.
Catenaries and related curves appear in architecture and engineering, in the design of bridges and arches. A sufficiently heavy anchor chain will form a catenary curve.
Most suspension bridge cables like the Golden Gate Bridge follow a parabolic, not a catenary curve, due to the weight of the roadway being much greater than that of the cable.

JTB Catenary is available as an AutoCAD app on the Plug-ins or Add-ins tab or as a BricsCAD app.

Download here with installer for both AutoCAD and/or BricsCAD.

If you purchased on or after April 25, 2020 the upgrade is free of charge.

JTB Catenary is available as an AutoCAD app on Autodesk App Store or by contacting us.

Trial license is available for 30 days after the first usage. Trial license is for evaluation purpose only, and it has limited usage of 10 runs per CAD session. When purchased it can be used without restrictions.

If purchase has been done via Autodesk App Store the download is available on My Downloads page. Sign in with the same account used when purchasing.

Subscribe to our JTB Catenary newsletter or any of our other Newsletters.

AutoCAD 2000 or later or verticals based on AutoCAD where AutoCAD 2023 is the most recent version supported.

BricsCAD Pro or Platinum 15 and newer is supported. BricsCAD Classic is not supported.

Other CAD software can be supported upon request.

Compatible with those operating systems AutoCAD or BricsCAD runs on like Windows Vista, Windows 7, Windows 8, Windows 8.1, Windows 10 and Windows 11.

Older Windows versions might also work but are not directly supported. 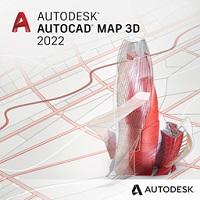 95 USD for one license or less depending on the amount of licenses.

When your purchase is completed you will get an email with a link to the download.

If you have really many users that you want to give access to this software we can discuss a discounted price based on your particular situation. Educational discounts available.

The license is perpetual. Support and upgrades is included for a minimum of 2 years after purchase. If you have more than one computer and you are the only user of the application one license is enough. If you purchased on or after April 25, 2020 the upgrade to 3.0 or newer is free of charge.

If your company is tax exempt note that BlueSnap does not currently offer a way to prevent tax from being charged on orders. We need a copy of the tax exempt certificate to refund the tax if already paid.

Use the app installer and it puts a button on the Add-ins/Plug-Ins Ribbon tab or in BricsCAD.

Activation is needed after purchase of a license or to request an extended trial.

The command to start the program is JTBCatenary (JC for short).

The JTB Catenary Window will show up. Firstly, you have to select 2 base points. If you want a multispan catenary, you can continue to select other points of other spans on the CAD screen.

To build the first span, beside 2 first base points, you have to specify one more property to make the catenary determined. It can be the length, the sag, the incline sag or an immediate point which the catenary will go through.

If it is multispan catenary, other span will be drawn base on the first span's property. The base property to be chosen can be the length, the sag, the incline sage or the tension at sag.

The resulting catenary will be created in the current drawing (DWG or DXF) as a polyline with the width being the same as the diameter.

Below the catenary has been created with a distance of 1000 between start and end and a sag of 100 has been specified, creating a true catenary curve with the length of 1026. 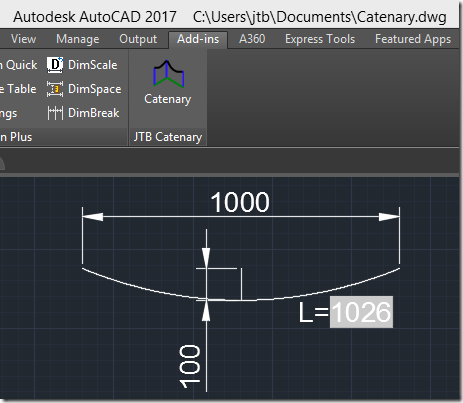 The license agreement is found here.