Migration is now easier to manage. A new migration interface organizes AutoCAD customization settings into groups and categories from which you can generate a migration summary report. You can import the geometry, fills, raster images, and TrueType text from a PDF file into the current drawing. The PDF data can come from either an attached PDF in the current drawing, or from any specified PDF file. The precision of the data is limited by the precision of the PDF file and of the supported object types. Some properties such as PDF scale, layers, lineweights, and colors can be preserved. SHX fonts in PDF files are not supported for PDF import.
Primary command: PDFIMPORT The PDFSHX system variable controls whether text objects using SHX fonts are stored in PDF files as comments when you export a drawing as a PDF file.

You can publish design views to a secure, anonymous location within Autodesk A360. You can share views of your design by forwarding a generated link to the people that you specify without releasing the DWG file itself. Access to these views is provided by any supported web browser, and does not require recipients to have an Autodesk A360 account or install any additional software. Supported browsers include Chrome, Firefox, and other browsers that support WebGL 3D graphics.
Primary command: ONLINEDESIGNSHARE 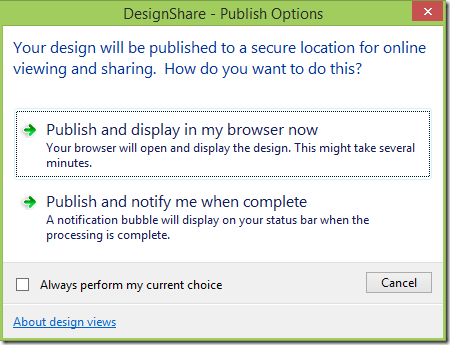 And see it in Autodesk A360 like this sample. You can specify precise locations on an attached coordination model using the standard 2D endpoint and center object snaps. This feature is available only for 64-bit AutoCAD.
Primary system variable: CMOSNAP

Several conveniences were added to improve your user experience.

The preview areas are expanded in several dialog boxes used for attaching files, and saving and opening drawings. The link to Buzzsaw in the Places list is removed.

You can set LTGAPSELECTION system variable to 1 to be able to select objects in the gaps of dotted or dashed linetype as if they were set to a continuous linetype or even snap to the gaps. Hardware acceleration must be turned on. This does not work with special linetypes like GAS_LINE.

You can choose whether to use the AutoCAD crosshairs cursor or the Windows arrow cursor in the drawing area using the CURSORTYPE system variable.

You can specify the delay timing for basic tooltips in the Options dialog box, Display tab.

You can easily send your 3D models from AutoCAD to Autodesk Print Studio for automatic final preparation prior to 3D printing. Print Studio support includes Ember,

The Insert dialog box is enlarged and reorganized to display a larger preview image and more characters in the Name field. You can resize the Insert dialog box to display larger preview images. The Name field in the INSERT dialog box now supports AutoComplete. As you begin typing a block name it automatically fills in the rest of the name, minimizing the need for you to scroll through the block list.

Column sizing is now remembered on the Custom tab in DWGPROPS dialog box.

A message displays if you try to delete selected objects using the Delete Key when the PICKFIRST system variable is set to zero.

The performance and reliability of 3DORBIT has been improved for rendered visual styles, especially for models with a large number of small blocks containing edges and facets.

The performance of 2D panning and zooming operations has been improved by taking advantage of the Graphics Processing Unit (GPU). First, linetypes that include only dashes and dots are now generated by the GPU, rather than relying on the CPU to create the individual parts. Second, graphics are now cached (retained) in GPU memory, which can make pan and zoom operations significantly faster.

Graphics caching is controlled by the hidden system variable 2DRETAINMODE. By default, 2DRETAINMODE is enabled (set to 1). If you have a problem with graphics performance, you can set it to zero to see whether the problem is due to caching.

The visual quality (line smoothing) for linetypes has been improved. Dots in linetypes are also easier to see.

Line smoothing is supported during the preview of the just as they will appear after the operation is completed.

The performance of object snapping has been improved by skipping geometric center (GCEN) computation for polylines with a huge number of segments. See PLINEGCENMAX system variable.

Any files in the Program Files folder tree that are under the operating system's UAC protection are now trusted. This trust is indicated by displaying the implicitly trusted paths in Trusted Paths UI and graying them out. Also, the AutoCAD code itself continues to be hardened against more sophisticated attacks.

There is a new License Manager making it easier to change between license types and save your work when a network license loses connection with the License Manager.
You no longer choose your license type and enter a serial number during the install process. Instead, you select it when you first launch AutoCAD. You choose between Stand-alone (Enter a Serial Number) and Use Network license. A new option in the Infocenter menu provides access to the License Manager where you can view information about the software license and well as installed Plug-ins, Add-ons, and Extensions. You can also change the type of license. For example, you can change from a network license or stand-alone (serial number) to another license type. If you are using a network license and you lose your connection to the license server a message is displayed indicating that the connection was lost. In the message, you can choose to have AutoCAD save your drawings and then shut down, or while time is still available, you can go back to AutoCAD to manually save your work. The timer to automatically shut down AutoCAD doesn’t start until you dismiss the message.

Whenever you change your license type, AutoCAD releases the license, and prompts you to save your work and quit. If you choose to continue working, a six-minute timer starts counting down. The message is repeated at the four- and two-minute marks. Each time you choose to continue working, the clock continues its countdown until it closes automatically.

If you choose to save drawings and quit, you’re prompted only for unnamed open drawings.  All other drawings are automatically saved.

Software licensing in AutoCAD 2017 is cloud-based and you must connect to the network license server at least once every: For more details see this article.

The HPLAYER system variable can now be set to a nonexistent layer for new hatches and fills. The layer is created when the next hatch or fill is created.

The DIMLAYER system variable is now used by all dimensioning commands.

Unnecessary tooltips have been removed from the Quick Select and Purge dialog boxes.

A new unit setting, US Survey Feet, has been added to the list of insertion scales in the UNITS command. INSUNITS has been updated.

AutoCAD 2017 no longer uses RGB value 192, 192, 192 as a transparent icon background. Instead, it's recommended that you convert these bitmap images to transparent PNG images. No support for BMP with transparent color in AutoCAD 2017

We made a minor change to the color handling feature in 2017, which caused this change in behavior. It is actually a fix to the way the HSL/RGB conversion works when the Color Model is set to HSL in the Select Color dialog box. ref

API and more for Programmers

For ObjectARX (C++, .arx apps) you must recompile the application using Visual studio 2015 (platform tool kit V140). All the old ‘20’ lib versions have changed to ‘21’ versions.

For .NET some apps will not work on AutoCAD 2017 if they make calls to APIs that have changed in this release. If the app doesn’t work you must refactor and recompile the App using .NET framework 4.5.

For LISP apps should work on AutoCAD 2017 without change.

Starting with AutoCAD 2017, the CDATE and DATE system variables no longer store the current time down to milliseconds. Use MILLISECS instead.

Use Visual Studio 2015 for .NET development but it might work with som of the older versions too.

.NET applications should target Framework 4.5 but can in some cases work with an older version.

Additions and changes made to the ActiveX API in AutoCAD 2017 and AutoCAD 2017-based products.

Note: 64-bit Operating Systems are recommended if you are working with Large Datasets, Point Clouds and 3D Modeling and required if you are using the Model Documentation feature of AutoCAD.

As always with system requirements these are minimal requirements for AutoCAD to run. For professional usage you surely want to have much better hardware.

Autodesk 2017 products can obtain license from Network License Server v11.12 and above. However, it is strongly recommended to upgrade the license servers to the latest version, v11.13.1.2, when using 2017 products.
Supported operating systems for the license manager are:

Unfortunately there is no tooltip or preview image when holding the mouse over a layout tab name in the vertical layout list. This makes it hard to see layout names that are too long to show completely.

When moving objects the objects in the original position are displayed with a faded deletion effect. For consistency this should also apply to rotating and scaling of objects but it does not.

When trying to change height of ATTEDIT dialog box it looks like the height can be changed because the cursor changes.

CENTERDISASSOCIATE is not showing up if search for commands in the application menu. It should show up if you for example search for disassociate center mark. Same with CENTERREASSOCIATE and CENTERRESET.

Enhanced Attribute Editor (EATTEDIT) is missing & in block names and tag names (at the top) containing &. For example a block named a&b shows up as ab. Similar problem with ATTEDIT dialog box.

On the Start tab the Recent Documents preview icons are not scaled correctly. Make a drawing with a circle and notice how it is compressed to an ellipse in the preview.

Wipeouts with many vertices can cause AutoCAD to lag. ref

Merging layers containing certain characters like for example # or @ and possibly others will make the drawing corrupted.

Isolating layer from Layer Properties Manager and then running LAYUNISO results in "No layers to restore from LAYISO command.".

(osnap (getpoint) "QUI,END") will always return nil because quick osnap is not available in AutoCAD 2016 or newer.

Accumulated hotfix 1 for AutoCAD 2017 based products

Find the certified and recommended computer hardware for the products or suites you are planning to install. For more information, go to www.autodesk.com/hardware.

If you want to participate in the Beta testing for the next release of AutoCAD (AutoCAD 2018) visit http://beta.autodesk.com.

The following commands are new and updated in AutoCAD 2017.

In this release, the following Commands have been deprecated:

In this release, the following System Variables have been deprecated:

The following system variables are new in AutoCAD 2017.